← The Ten Day Nightmare: Day Ten – A Nightmare on Elm Street (2010)
Interview with Don May Jr. of Synapse Films →

The 30 Craziest Punisher Covers of All Time

Daredevil Season Two is here, and among its many accomplishments (more action! more ninjas! a slightly better costume!), it has finally brought The Punisher, the beloved Marvel anti-hero, to the MCU. Or, at least, the Netflix corner of the MCU. Regardless, Frank Castle is once again alive and well on our screens, after not one, not two, but three failed attempts to launch the character as a movie franchise. That might be kind of embarrassing, but maybe the character was just waiting for television all along. By most accounts, fans are digging Jon Bernthal’s performance, and while Marvel Head of Television Jeph Loeb has been quick to point out that no Punisher Netflix series is officially ordered right now, it seems a fairly safe bet we’ll be seeing more of the skull-emblazoned vigilante sooner rather than later.

The good news for any potential Punisher show-runners that might soon find themselves heading a new series is they have a lot of material to mine from. Since his debut in 1974, The Punisher has had eleven ongoing series (with a twelfth scheduled to start later this year), and almost more miniseries and one-shots than one can count. So, yeah, there are a lot of stories to pull from for inspiration…but, as one might expect from any character who has been around for that long, there are also a lot of issues they might want to steer clear of. Thankfully, it shouldn’t be too hard to figure out which is which, since usually just a quick look at the cover can go a long way toward telling you when the Punisher creative teams had, well, let’s be polite and just say, lost their damn minds. With that in mind, let’s take a look at 30 of the craziest Punisher covers of all time: 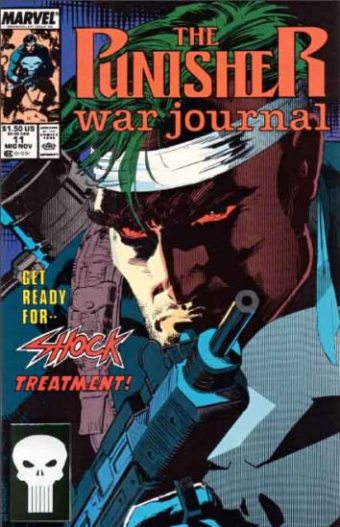 Let’s start simple, with a cover that, all things considered, doesn’t really seem that odd…except for a bizarre coloring decision (or possible error?) that makes it look as if Frank went through a brief punk-rock phase.

Here we see Patrick Warburton as The Punisher, along with some misleading motion lines that appear to suggest Frank is lovingly fondling his weapon. Actually, come to think of it, that doesn’t seem that out of character for the guy. 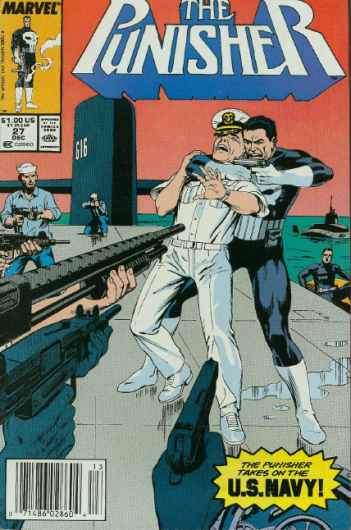 Now, calm down, Frank…I don’t like that Village People song either, but this is a bit much. 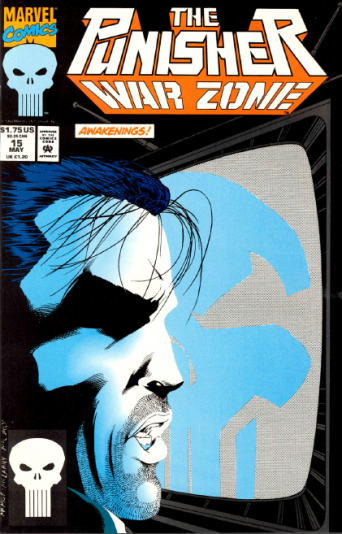 One of the lesser known tragedies of Frank Castle’s life is that his mother never taught him the proper distance to sit from a television set. Then again, who can blame him for wanting a closer look? He seems to have found the one network that simply broadcasts his logo over the airwaves. 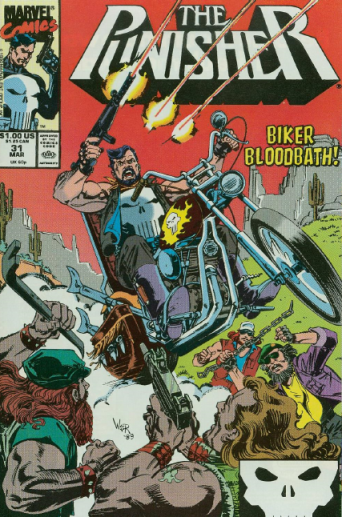 To be fair, every time I want to laugh at this cover, I end up thinking about how similar it looks to the great Brian Bosworth movie Stone Cold, and I kind of fall in love with it.

I’d like to think Frank’s savage beating of a matador is just evidence of his strong animal’s right stance. Regardless, the real joy here is wondering just how much a guy like Castle could possibly be intimidated by a Cirque du Soleil performer. 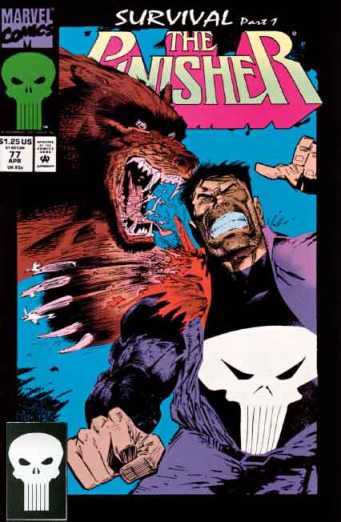 Here we see Frank Castle one devoured raw liver bison away from winning an Academy Award for Best Actor.

In 1993, Marvel unveiled a series of books under the 2099 banner, featuring futuristic versions of some of their most popular characters. The Punisher 2099 was Jake Gallows, a member of a private police protection service who, upon finding Frank Castle’s old War Journal, decided to take up his mantle. It was pretty much everything you would expect a Punisher book with laser guns, written in the early ’90s, to be. It also, judging by this cover, finally answered the question of “what would happen if Nigel Thornberry found the glove from Wes Craven’s New Nightmare?” 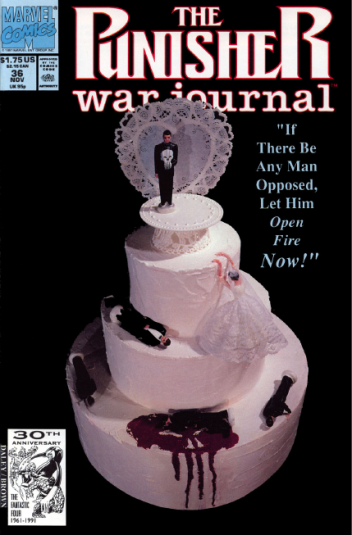 If you can find a partner that agrees to this wedding cake, you’ve got a keeper. 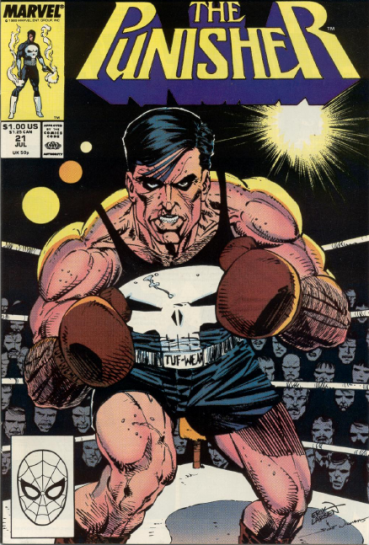 I guess sometimes Frank likes to put aside his illegal quest for vigilante justice and instead settle his beefs in a sanctioned boxing match. And I guess when that happens, a crowd of floating detached heads like to come watch.

It didn’t take very long into The Punisher 2099‘s run for Marvel to introduce another new Punisher, in the form of Vendetta. The big difference between her and Jake Gallows (I mean, besides the obvious) was that she took a sadistic glee in her work. She made a few appearances throughout the book’s run, but never felt like much more than an obvious gimmick character…something even the person who wrote the cover-text here seems unable to deny.

A couple things about this cover stick out to me. First, I love how excited whoever did the copy was about Frank getting a DOG! Second, leave it to The Punisher to find what appears to be an actual hound of hell as a pet. But my favorite thing here by far is the perspective of the illustration, which makes it look as if the dog not only has human hands, but is resignedly putting them up as if to say, “yeah, I don’t get it either.” Anyway, I can definitely get behind the idea of Castle having a canine sidekick. I wonder how that worked out for him… 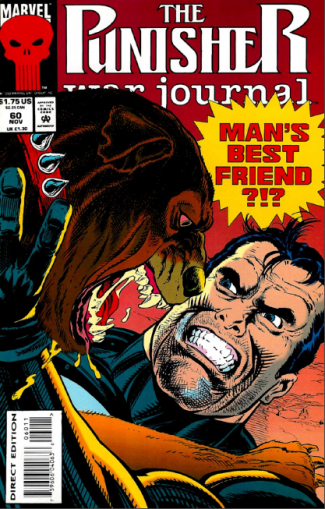 Sometimes you’ll hear people say that during the ’90s, comic books were way too obsessed with dark and gritty, over-muscled, weapons-crazy depictions of machismo. I honestly have no idea what they’re talking about. 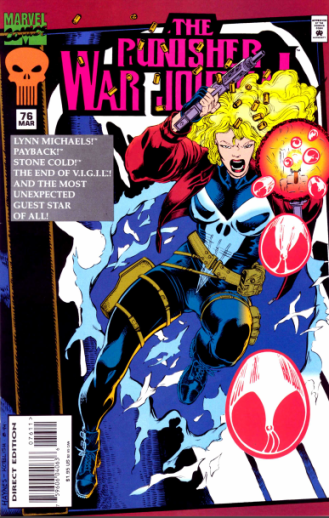 Vendetta isn’t the only woman to take up the Punisher’s work. There have actually been a few,like Lynn Michaels – a cop turned vigilante who had a brief run as an ally of Castle, before taking over his role during a short period where Frank was believed to be dead, earning herself the extremely progressive title, “Lady Punisher.” She was a decent if ultimately forgettable character, but Netflix would be wise to leave some copies of this issue sitting in the office come contract negotiation time, as a reminder to Jon Bernthal that there are other avenues they could explore. Oh, and by the way…that “most unexpected guest star of all?” I’ve read the issue, and – as far as I can tell – they’re just talking about Lynn’s father. I suppose that does count as “unexpected,” since no one cares.

I mean…what do I really have to say about this one?

For a while, the Punisher War Journal series was really into these text boxes on the cover that often tried to lighten things up with a little humor. Then again, maybe this isn’t meant to be a joke, but is rather just really good advice to all jet-ski rental companies who are thinking about doing business with this guy. Look, just make sure you get a decent deposit, is all we’re saying.

In the late ’90s, Punisher’s popularity was waning, and Marvel took a pretty drastic turn with the character to try to renew interest. After committing suicide, Frank Castle was sent back to earth as a supernatural assassin working for Heaven, complete with a glowing arcane symbol on his forehead and magic guns that he could summon from thin air. Needless to say, this did not go over well with fans. “Angel Punisher” would only appear in two mini-series before Castle was returned to normal, explaining away all of this nonsense with just a couple lines of dialogue. Still, as bad as it was (and it was BAD), at least it gave us the opportunity to see Frank shooting an actual angel in the chest. That’s gotta count for something.

Well, ol’ Frank sure does seem to have gotten himself into quite the pickle this time, doesn’t he? But don’t let that distract you from the even wackier picture of Castle in the upper-left-hand corner. And by “wackier,” I guess I mean “uncomfortably racist.”

What can The Punisher say? He’s a huge James Bond fan. 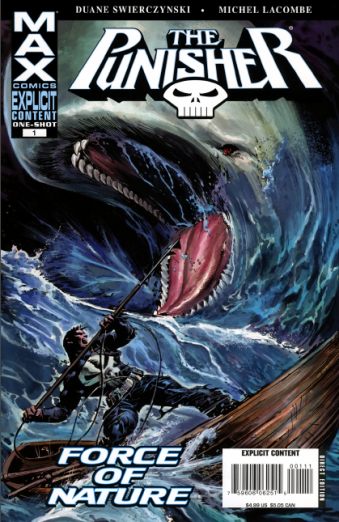 Now, before all you Blackfish viewers get upset about this one, let’s keep in mind that a lot is often made of the point that Frank Castle only punishes the guilty, and never the innocent. So, we can probably assume this whale did some really messed up stuff at some point in its life. Like dealing whale drugs or trading in whale child pornography. 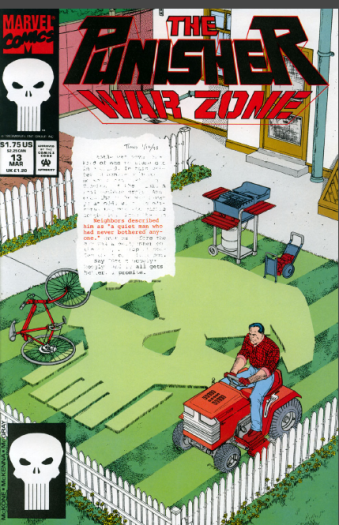 This one might seem like a bit of a cheat, as it comes from the Thunderbolts ongoing and not a Punisher solo title. Still, Punisher was a main character in this title, and how could I resist this cover? Castle and Elektra’s on-again, off-again relationship – seemingly born solely out of the fact that they both love to kill bad guys – is one of my favorite occasional sub-plots of these characters. Will Netflix ever go for it? Probably not, but even if they do, I’m guessing we wouldn’t see this scene brought to life.

Supposedly, writer Mark Millar wanted Frank Castle to become the new Captain America following Steve Rogers’ death in the wake of Marvel’s giant Civil War event. Millar felt Castle’s blood-thirsty brand of justice was more in line with America’s real-life attitude than Roger’s old-fashioned optimism had been. Obviously, Marvel didn’t agree, as they gave the Captain America mantle to Roger’s old sidekick, Bucky, instead. But that didn’t stop Matt Fraction from throwing a Captain America-inspired costume on Frank for awhile. Looking at it, I think Marvel was ultimately right…

Despite this cover, this issue does not feature both Punisher and Hulk ingesting Pym Particles and having a Kaiju battle in the streets of New York. Send your letters of complaint to Marvel.com

Yet another attempt to breathe some new life (so to speak) into the character during a down period, in 2009 writer Rick Remender dared to trigger everyone’s repressed “Angel Punisher” memories by once again rebooting the character as a supernatural being. This time, Frank was sliced to pieces by Wolverine’s evil son, Daken, and then stitched back together again and resurrected by Morbius, the living vampire. “Franken-Castle,” as he was now known, now worked with Morbius and the Legion of Monsters, fighting other creatures that go bump in the night. This divisive new direction was at least better received than “Angel Punisher” – many (including me) did hate it, but Franken-Castle certainly had his fans, as well. Still, as usually happens with big changes like this, it didn’t last long, and Frank was soon back to his old self again. What will be the next absurd supernatural reboot of the character? Only time will tell. 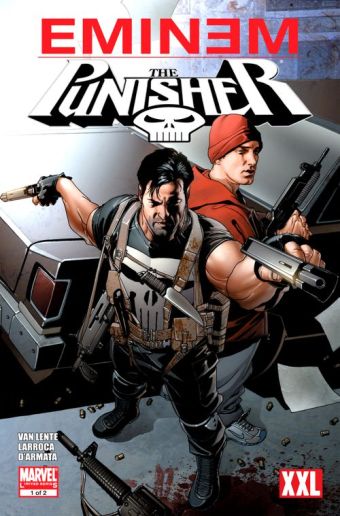 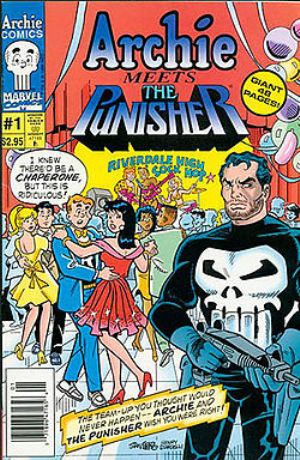 And, uh…so did this.

In John Woo’s action classic, Hard Boiled, Chow Yun-fat battled a hospital full of gun-wielding thugs while holding a single infant. One infant?? Frank Castle laughs at Chow Yun-fat. But, despite Frank clearly being even more of a bad-ass than one of the most bad-ass movie stars ever, what I really wanted to draw your attention to here is the upper left hand corner, where we see a small tyke wearing a Punisher shirt and…oh god…holding an Uzi? Well, uhh, you know…different times…uhh…let’s just move on to the last one, shall we??

You know, I introduced this column as covers that Netflix should shy away from when developing a Punisher series, but…hell, screw that. Netflix. Jon Bernthal. Space Punisher. Let’s do this.

Give me zombies or give me death. Wait...that doesn't make sense.
View all posts by Trevor Snyder »

← The Ten Day Nightmare: Day Ten – A Nightmare on Elm Street (2010)
Interview with Don May Jr. of Synapse Films →