Documentaries To Watch On Halloween →

You’d be forgiven for assuming the above image is from a film about a killer in a Don Knotts mask. In actuality, it is just one of many examples I have found of absolutely atrocious Michael Myers masks that are (or have been) available to purchase for those wishing to spend October 31st as their favorite cinematic Boogeyman.

Ah yes, the Michael Myers mask. In its original form, it is, unarguably, one of the most effective, iconic visuals in modern horror history. And a big part of that effectiveness is the pure simplicity of it. By now, most horror fans know the story – a simple Captain Kirk mask purchased for $1.98 by Halloween production designer Tommy Lee Wallace, who then widened the eye holes and spray-painted the mask an eerie bluish-white. The combination of Wallace’s modifications and the terrific work of director John Carpenter and cinematographer Dean Cundey – both of whom knew exactly how to light the mask for maximum creepiness – made the mask’s “pale features of a human face” (as it is described in the film’s script) absolutely terrifying. Even today, it is still considered by many horror aficionados as the scariest mask of the entire slasher genre.

With a mask that simple, you’d think it would be easy to replicate, right? Well…about that. The original Myers mask was only used in other film, 1981’s Halloween II. That film ended with the mask – and Myers himself – ablaze, and as far as the filmmakers were concerned, that would be the last time we would ever see the iconic mask. Of course, as we all know, it didn’t quite work out that way. After the disappointing box office and audience reception to Myers-free (and still incredibly underrated) Halloween III: Season of the Witch, producers decided Myers was, in fact, the true star of the franchise. He would then proceed to return in seven more films (as of this writing). But never again wearing the actual mask from the first two movies.

When it came to replicating the original mask, the makers of these later entries…well, they tried. And, to be fair, they mostly pulled it off. That’s not to say there weren’t some hiccups along the way. Um, hello, Halloween 5…

But, for the most part, the sequels were able to at least catch the overall essence of that original Myers mask and capture something about what made it so scary.

That’s certainly more than can be said for the makers of numerous Michael Myers knock-off masks that have populated stores for years since Carpenter’s original classic. Much like the hockey mask of Jason Vorhees, the Myers mask is so simple that various companies have felt no shame in mass-producing unlicensed knock-offs for sale every October. Recently, I was looking at a number of these dreadful Michael Myers masks online, and started wondering just how the movie series itself would have gone if the filmmakers only had these to work with. Something tells me perhaps Myers would not be the classic screen villain he is today. But don’t just take my word for it. Let’s take a look. Here are some iconic moments from the Halloween series, now re-imagined with actual, cheapo Myers knock-off masks. 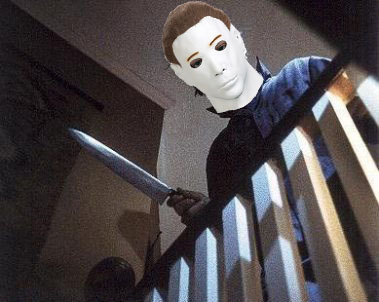 We start with one that isn’t too bad…it’s instantly recognizable as Myers, which can’t be said for some of the masks we’ll be looking at it in a moment. I think the biggest problem with this one is just how pleasant it makes Michael look. Sure, he’s got that butcher’s knife in his hand, but apart from that he just looks like he’s politely asking you to come upstairs for a nice conversation. Actually, that would probably be a fairly effective tactic for him to procure victims. Maybe he should consider this mask.

This is another one that is almost there…though for some reason, I can’t help but look at it and think of the late, great character actor J.T. Walsh. But hey, Walsh played some pretty scary guys in his life, so that’s not necessarily a bad thing.

Here we have a Michael that clearly cares about his appearance, as evidenced by the striking blue lipstick he has decided to wear. Makes sense…Halloween is a big night for the guy, and really the only day he goes out on the town. 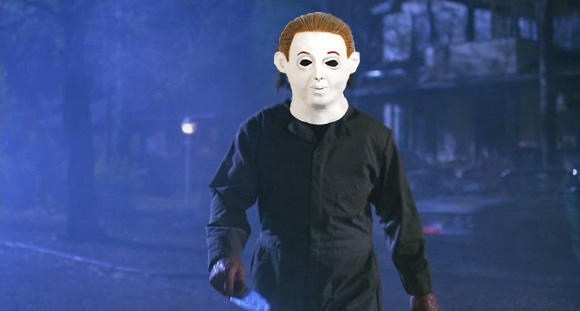 There’s really not a whole lot you could do to make Halloween 6: The Curse of Michael Myers even worse than it already is…but making him look like a creepy old perv coming in for a kiss is a pretty good start, I guess. 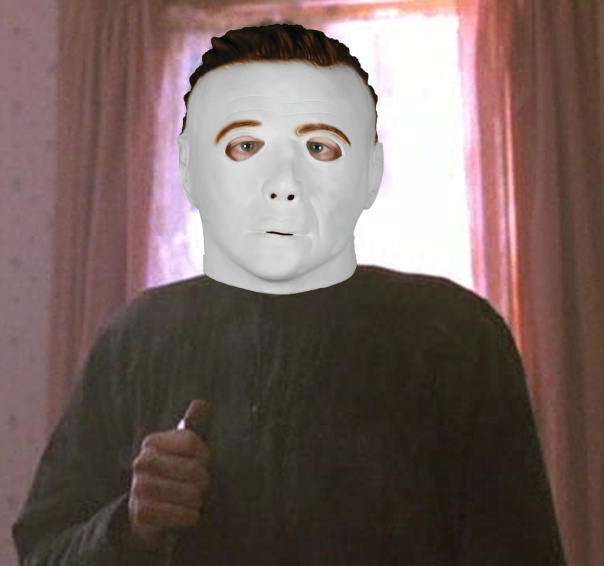 A lot has been said about Michael Myers’ unexplained ability to drive a car throughout the Halloween series. This version of Michael looks like he would barely understand the concept of how a wheel works. I refuse to be frightened by a killer that visually appears to have the mental aptitude of Ernest P. Worrell. Also, why is everything lopsided with this mask? Did Michael have a stroke?

We don’t often consider the sensitive side of Michael Myers, but here we see that sometimes he is even more shocked and disturbed by his actions than those he is, well, brutally choking to death. I mean, either that or he just really didn’t expect to have his picture taken at that moment.

Well, this is from Halloween 5, and – truth be told – it might actually be a slight improvement over the film’s actual mask. I mean, sure, it’s not perfect…but doesn’t it make Michael more relatable to know that even he can have bad hair days? Oh, and speaking of bad hair days…

Look, I’m not gonna lie – I love this one. Stay tuned for my upcoming Kickstarter where I try to fund a George Lucas-like attempt to digitally insert this mask (and, more importantly, this hair) into the entire Halloween series. Rockabilly, pompadour Michael Myers is just something I need in my life.

The “hobo” version of Michael Myers in Rob Zombie’s incredibly polarizing Halloween II was already a very bold new take on the character. Just imagine if Zombie had gone that extra step and cast Jay Leno as Myers. No matter how silly you might find all of the movie’s White Horse stuff, I think we can all agree that would be absolutely terrifying.

And, well, I guess if Jay Leno is gonna have a turn at being Michael Myers, it’s only fair if Conan O’Brien gets the same. Look out, Tyra, he’s going for the string dance!

Yeeeaaaahh….I’ve got nothing for this one.

Give me zombies or give me death. Wait...that doesn't make sense.
View all posts by Trevor Snyder »

Documentaries To Watch On Halloween →